Last week, Jack (our Siberian Husky) decided he would like a break from us, so he slipped out of his collar and bolted like an Olympic sprinter from Jamaica. It was dark, and he's mostly blind, but he still eluded capture while we looked for him the next few hours. 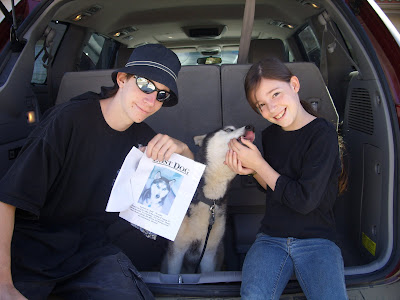 I made up flyers before going to bed, and Chana and Micah put them out early in the morning, and we were so happy to hear from someone around 10am. A nice lady a few blocks away had put him in her back yard for the night; knowing he must belong to someone, even though he was without his collar. 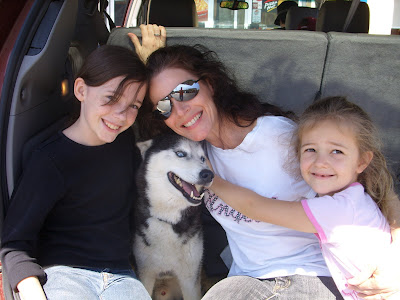 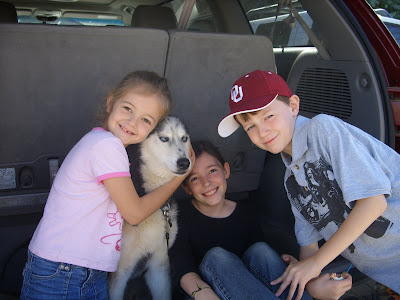 Jack has run off before, it's a 'husky' thing and they just love go explore. However, we have never had to look for him longer than about an hour. We were all so excited, the whole family went to pick him up. Immediately after picking him up, we went straight to Petco to get a harness-style collar he can't slip out of. 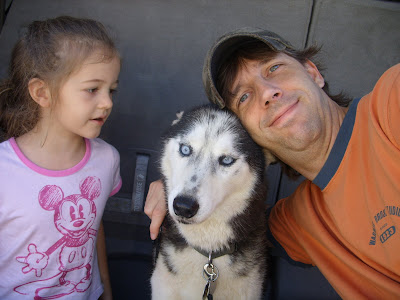 Email ThisBlogThis!Share to TwitterShare to FacebookShare to Pinterest
Labels: Family

What a great lookin dog! I met his distant relative the other night. He was hanging out at the Barcade.

"Slaughtered this horse las' Tewsdy. Think it's startin' to turn."

We just got a wire-haired fox terrier, and any time the front door opens, she bolts like she's at the track and everyone's got odds on her. I chased for a good half-mile today. And we have a harness on her already.

Glad you got Jack back. He's a sharp-lookin' mutt. Say, is he a Dapper Dan man?

Must say, the best way to bring out the good in humanity is to go looking for your beloved family pet. I ran into nothing but kindness that morning as I hiked the wash (riverbed where we hike across from our neighborhood) and put up "wanted" posters of Jack at my favorite Starbucks. That ended up being the hidden gem in the whole affair! There really ARE good people out there--there's more than just selfish farts in CA after all!!

Just kidding...there's tons of amazing people here...lots of farts too but that's beside the point.

Wha???? you never mentioned this!