iPhone, How I Love Thee

...but thou hast come at a great price. 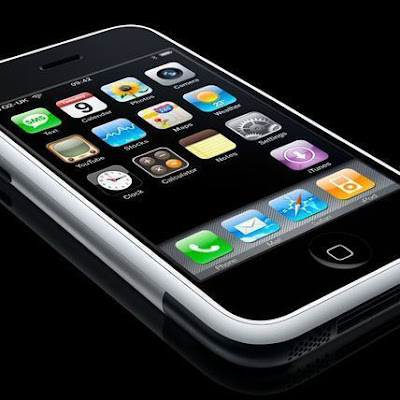 I officially drank the iPhone kool-aid last week, by ending my 30 day trial early and porting my permanent cell # over. It's everything you've heard and more, living up to the "Phantom Menace" sized hype.

So if I'm so high on this marvel, what do I mean by great price? Before defecting totally from Verizon, they told me, "Make sure you don't have any voice messages, 'cause you'll lose what's there." I thought, "I don't have any new voice messages on there, 'cause I've been forwarding my number to the iPhone."

I forgot about my saved ones.

When I realized I lost my saved messages (30 minutes after it was too late), I was broken-hearted. I literally grieved for them. Sounds stupid I know, but let me explain what I lost.

I still had the message when Chana called me to tell me Maddie had peed on the potty the first time ever. It was hilarious, and I can still remember Maddies tiny voice telling me what she'd done, and asking for her treat!

I still had the message when Sky called me just to talk. He was 5, and decided he'd call me to chat, for no reason. I love that.

I still had the message from my Dad when he called me with pride in his voice, because he had received the Emmy I shipped to him.

I had many others, some silly, some more of keepsakes than anything else. My great mistake was putting off recording them to my computer over the last couple of years. I thought about it so many times, but never went through with it; and me, a sound guy for a living... sloppy.

The moment I figured out I had lost them, I prayed for God to embed them in my brain. I don't ever want to forget the sound of those voices. My only choice is to learn from this, and realize that there will be countless more beautiful messages from loved ones... messages that I will backup.

Years ago, hotmail deleted all my saved emails because I hadn't been online in a while. Similar types of emails - special ones from special people. A whole slew from my father that I thinking of compiling into a book. But no, hotmail had other plans. I feel your pain.

So sorry. You can pass your phone along to me if your upset enough!

not sure if this will provide any comfort... but years ago, when i was recording that little demo at hero productions, we took a lunch break. we drove to goldie's, you presented me with a copy of "help!" and introduced me to the ranch dressing with french fries thing... at some point you showed me a digital watch (one of the kind that was strapped to the wrist of every kid who ever got a punch in the gut for reminding the teacher she forgot to collect the homework assignment). as i recall it didn't even have a strap on it...

you were looking up a phone number or date or something of the sort on it and commented how it was amazing that this little device was really an extension of your brain... it remembered things so you didn't have to. i marvelled at that obvious wisdom and have thought back on that statement often. it's been the inspiration behind my archiving all sorts of info and images that has entertained, reminded, and outright saved me more than a few times.

Greg. I can't believe you remember that watch. I had forgotten it. Now I remember carrying it in my pocket, kinda like a palm pilot, before they were around. I'm glad you have gleaned some kind of wisdom from it. Amazing where some wisps of inspiration come from, isn't it? Thanks for sharing your memories with me.

I understand that. I regularly go to my voice mail to resave some precious messages that I don't want to lose.

Hey, Mark, hope you see this comment sometime! Elijah has a great song about the I-phone that he wrote about a friend of his wanting one. It is called "I Want". It has a lot of double meanings in it and is really fun to hear. It might be on his blog is you have time to listen. Carrie D.