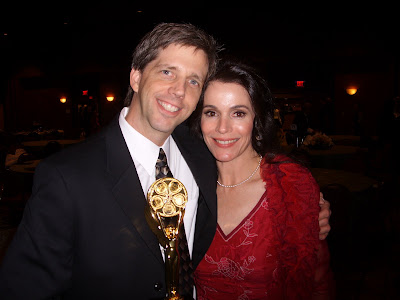 A few of weeks ago, Chana and I went to the 2009 MPSE Awards show, and we came away winners in more ways than one.

It's an expensive ticket to get in, even if you're nominated, so we don't usually go to this show. But this year became the exception when I learned that sound designer Ben Burtt was receiving a Career Achievement Award. Besides that link, you can also learn lots about him here, and here.

I became acquainted with Ben on (of all places) the volleyball court at Skywalker Sound in 2004. Later, during my time at WB Animation, I was able to uncover some ancient sound effects information and other relics for him, and it was nice to be able to do a favor for a man who has given us all so much. So needless to say, it was an easy decision to go to see him and a multitude of my friends that would be coming from Skywalker Sound. 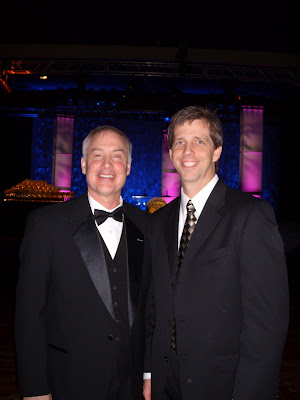 When Sky, our 8 year old, heard that George Lucas (heretofore to be referred to as GL) would also be in attendance to introduce Ben for his award, he immediately went to his room and drew a picture for him, then proudly handed it to Chana with the small request: "Give this to George Lucas."

Wondering if an encounter with GL would be possible in a crowded venue, we arrived in style in our minivan as they were closing the valet garage. I somehow talked our way into the last spot, impressing Chana with my negotiating skills. We should have recognized this fortune as a sign that it would be a good night.

During dinner, we made our way around the ballroom, connecting with several friends from LA and the SF Bay area. We approached Ben and GL's table, and in his usual gracious manner, Ben greeted me like an old friend. Chana and I hadn't met his wife Peg before, so he introduced her to us, and she and Chana immediately hit it off. So much so, that when Ben and I had exhausted our conversation, they were still at it, with one of those conversations that you feel like you're intruding if you're standing anywhere nearby.

So, I made off for other friends to find. In the meantime, Chana had been holding Sky's drawing in her hand this whole time, with GL sitting right next to where she was standing. She finally told Peg what Sky had hoped for, but said she was apprehensive about approaching him like a schoolgirl fan at an event like this.

Peg said, "Let's get Ben to do it." She pulled Ben over and explained the situation. Ben graciously got GL's attention and introduced him to Chana. She explained to him that Sky (whose name George loved) wanted to give him this drawing. 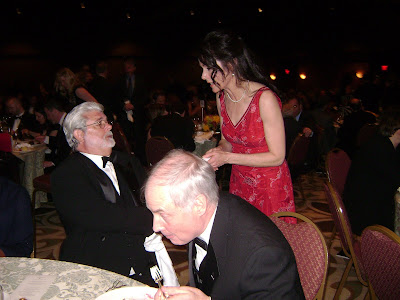 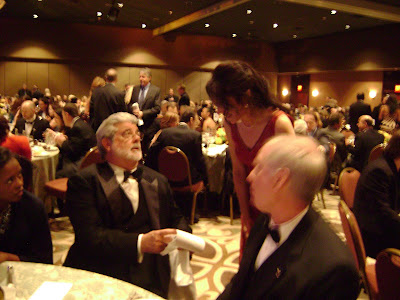 GL opened it up and as he looked at the space battle on the page, he said, "Hey Ben, look, it's a storyboard for our next movie!" He thought a moment more and then said, "How 'bout I sign this and give it back to him." We had never even thought of this, being so focused on getting it to him, but what a blessing to be able to return it to Sky for a keepsake he will always cherish.

actually worth the wait of months without a blog post... nudge, nudge.

Awesome, Mark. I'll bet you scored major Dad points with Sky! I have a Sky original drawing myself, but I doubt he would get too excited if I signed and returned it. I'll just hang on to it, waiting for it to skyrocket (pun intended) in value...

Awesome! Sky must show the drawing and George Lucas' signature to me next time I come to visit, which, God willing, will happen.

I'm dying to see the picture he drew!!!!

Thanks guys. Karen, I'll scan it and post it.

Nice. I mean, regardless of how much I dislike the recent three movies and what they've done to my childhood, I still looked at that photo and said, "That's Chana and FREAKING GEORGE LUCAS."

I'm assuming the giant piece of hardware you're holding in the first photo indicates a Keefer win? Did you even care at that point?

And I third the suggestion to post the drawing. If you can wrest it from Sky's hands, that is. What a treasure.

Yeah Adam, I did win that night, but you're right, the real prize, (and the thing that will be cared about and remembered in 20 years) is the drawing.

I'd be willing to sign a photo of "the big knees" if Micah is feeling jealous of younger brother.

What a great story! What great parents! We miss you guys.