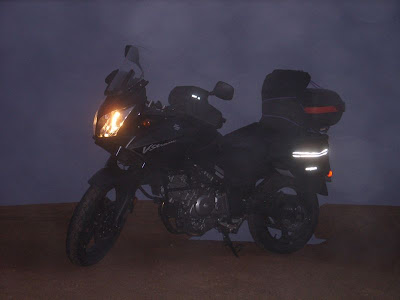 Last Saturday, I rode my motorcycle home from Marin County... the loooong way. I have wanted to ride the PCH through Big Sur for a while now, and finally got the chance. I was on the road about 12.5 hours and 465 miles, and it was a great adventure; my longest ride to date.

I stopped an annoyingly large amount of times for pics. If I had been riding with anyone that day, I think they would've left me behind about halfway through. Here's a bit of a photo journal of it. (click on the pics for bigger sizes)

I left San Fran at about 5:30am. The above pic was taken on Conzelman Rd, on the north side of the Golden Gate bridge. The fog was so thick, you wouldn't even know the Pacific was there, much less an enormous bridge in the background.

Below, a little daylight allowed me to start getting half a view. 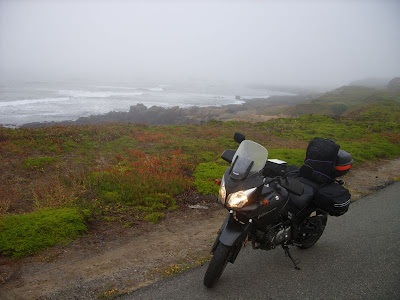 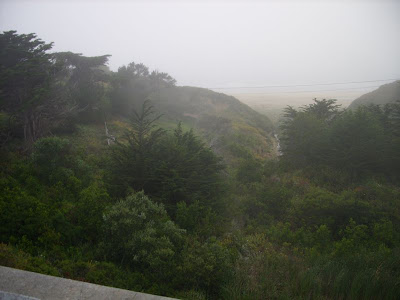 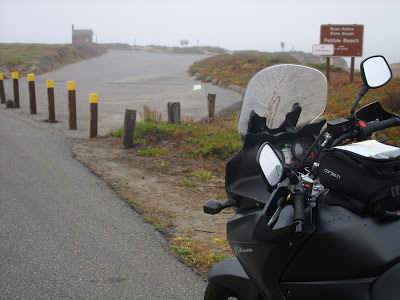 Before long I found myself in Carmel. On a whim, I turned off PCH at Ocean Ave, followed it toward the water, and rode through this quaint town set back in time. 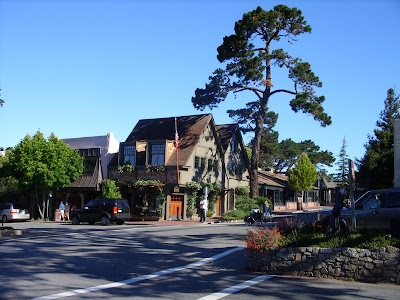 Carmel by the beach is gorgeous. The sun finally decided to make an appearance about now. 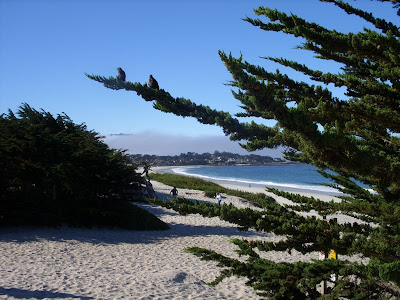 One thing I love about riding a motorcycle, but didn't expect when I started, is people come up to you and start talking about your bike, their bikes, your destination, whatever. People who would normally pass me by, will stop and talk to me because of this wonderful connection. This is Paul, and he and I had a great conversation by the beach about motorcycling. I chased him down later to get this pic of him in his sweet 50 year-old Cadillac. 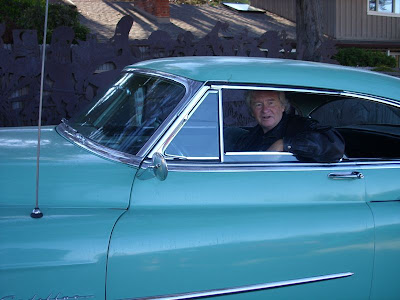 The beach on the south side of Carmel. 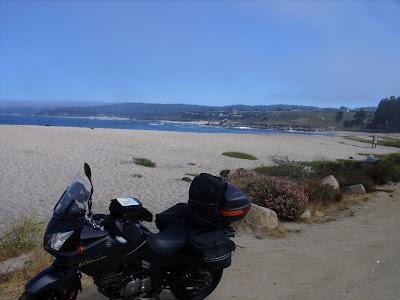 Leaving south from Carmel is the beginning of the twisties (curvy roads). This sign promised good times, and boy, it delivered! They should just put a big sign up with a smiley face on it, 'cause that's what it gives you. 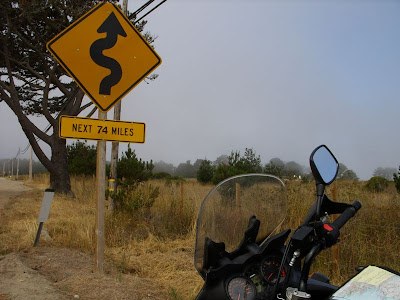 The heavy fog came and went throughout the day. 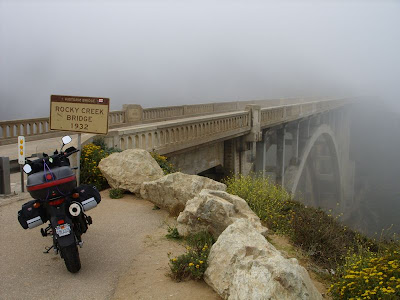 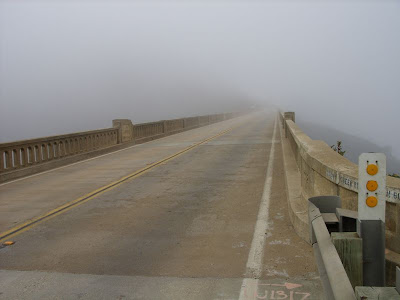 One of my favorite bridges of the day: Big Creek Bridge. First is close up, second in mirror, and third is distant. 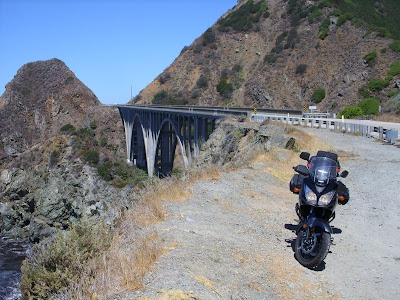 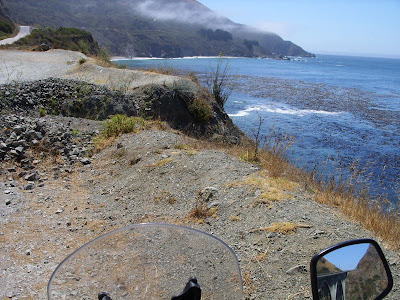 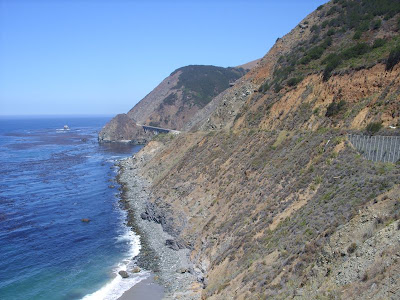 I'll wrap it up with a few random coastal shots. 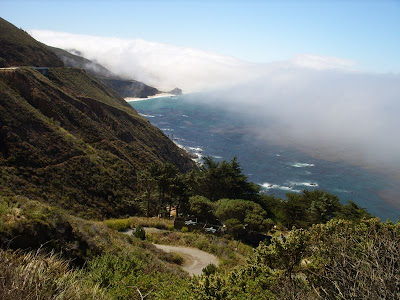 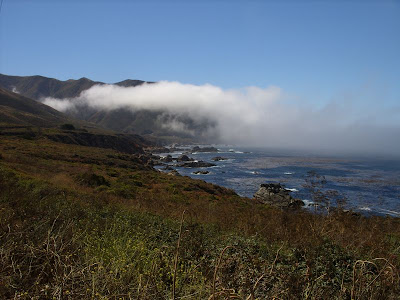 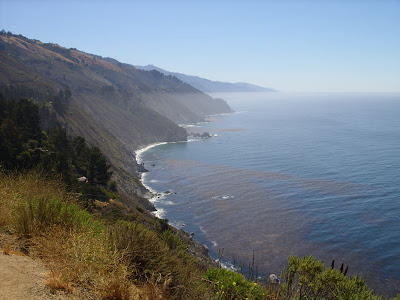 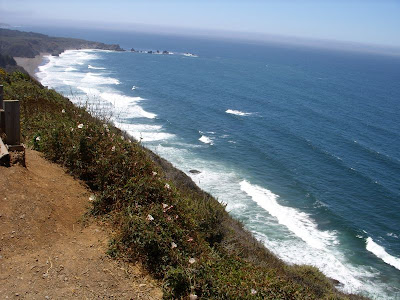 Monday, I'm making the trip back up to Skywalker Sound for more Clone Wars stuff, and if time allows, you can bet I'll be on this route in reverse.

I finally bought a new seat with gel inserts, so hopefully the long rides won't keep me squirmin'!

Awesome. I must confess that when I travel, the second I get on the road, I'm ready to be done. The thought of taking 12.5 hours to make an 8-hour journey sends my gag reflex into overdrive.

Wow. The last time I was on a bike, I was 3 or 4 and my dad drove me in a circle around the house. The pictures overlooking the backyard just aren't the same as yours.

I can't believe that's California. It looks like some remote island. I truly envy you. It takes about 12 hours to get from Corpus to my parents' house, but when you have four squirming, complaining kids, it's not much of a road trip, but one large headache. Also, there's no ocean or mountains to view on the plains of Texas on our route. (sigh) One of these days . . .

Ryan and I drove this route back from our honeymoon and again a year later when we went camping. We love it! In a Honda Civic. My favourite pic is the one of the Rocky Creek Bridge with the bike in it from the North. Awesome!

im terrified of motorcycles. and i have no idea why.

those beach shots are amazing! i grew in So. CA on the beach. i miss it terribly!

Here in Oklahoma, when we take a long trip like that, we get to look at a lot of construction barrels. On a toll road.

Wow...what a ride! I'd love to drive that someday...though I'm not sure I'm up to doing it on a motorbike...maybe one with pedals or maybe I could just run it on foot...Beautiful shots Mark!