A Spotlight On The Ambience

In Film/TV sound, you place ambient sound effects (aka: backgrounds) in scenes to enhance the impression of the time of day, the scene's location, mood or feeling, etc. This would include effects like birds, wind, traffic, crowd voices, and many more, depending on the structure of the scene you're building. It is also the best way to describe many unspoken things in the scene subliminally.

If it's designed well, the movie fan won't give it a thought, but just accept that it was the sound that was picked up on location. There are times when background ambiences are supposed to play a more obvious role - to spook us with a scary drone, or overwhelm us with raging waters so we feel suffocated, etc - but 99% of the time, background sound effects are meant to be just that - background and invisible. 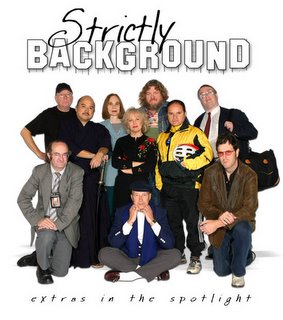 Another type of "background" in Film/TV production is the use of background performers. We don't think about them when we watch a movie, but if they weren't there, the show would seem empty. Just like background sound effects, they're vital, but we rarely notice them.

Funny that you DON'T notice something when it's there, but you DO notice it when it's not!

I'm going to be working on a feature documentary titled "Strictly Background" for about a week. It's based on ten career Hollywood extras. I found it fascinating and wanted to be a part. Hopefully Jason Connell, the creator and director of the doc will have success in getting it widely distributed. Watch the trailer.
Posted by Mark Keefer on Friday, August 04, 2006

Found your blob by accident ("Next Blog" icon) and my curiosity was peked when discovering you're from north Texas (me too; went to ETSU in Commerce). I check out your IMDB site, and giggle to find that your wife had a bit part on "Dallas." In light of your documentary on paid extras, I'll just mention that I was a paid extra on "Dallas" for the PILOT in 1978. So, I'm just leaving a "Hi, ya'll!" from Ft. Worth... kas

BTW, I was in episode #2... when Vicky drags Lucy to high school... I've got curly hair and a green sweater, in the hallway ;-)

you'll be able to see my wife and me as background in the upcoming film "quebec".

you'll see us descend a staircase for the elevated train as sean william scott and john c. reilly are going up, and later standing on the train platform with them.

Thanks for stopping by. Chana enjoyed her time doing the "Dallas" episodes and remembers how nice all the players in the principle cast were. She says Larry Hagman was the biggest cut-up, then seconds later be the perfect sly "J.R." when cameras were rolling. We'll look for you in the pilot if we get it sometime.

There's a lot more extra work out here. Maybe you should move here...