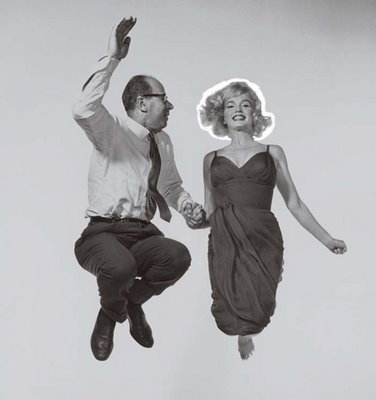 Apparently, he photographed everyone noteworthy in his day, and during a six year period from '52 thru '58, he asked his subjects to jump at the end of their session and he would shoot it.

The pictures really inspire me in several ways. He probably had no trouble getting the Hollywood crowd into the act, but he also had people like Nixon, Churchill, and Einstein jumping for him.

People who were not thought of as the playful type were jumping for a photograph.

Deep down, I have to believe that no matter who the person was he had jumping, they HAD to feel like a kid again, even if just for half a second.

That thought makes me smile just as much as the pictures do. It makes me want to jump too ... there, that was fun. Unfortunately, no one got that one on film, but the cat sure looked at me funny.

There's something about the single act of jumping, or playing in a simple way like that, that I feel if I can do that, I can look at my "grown-up" work in a fresh way, no matter what I'm approaching. Sound, film, music.

Maybe it can change my approach when playing with my own kids? Who knows.

When is the last time you did something that made you feel (in a good way) like a kid again? Have you recently played with a toy, or skipped a stone, or watched a cartoon, or eaten Bugles off the tips of your fingers?

Whatever it is, go ahead.

It might feel weird at first, but I'm sure you'll enjoy that familiar feeling.
Posted by Mark Keefer on Wednesday, October 18, 2006

Nice post. I'm going to do something kiddish today to bring back that young feeling ...cuz I haven't had my coffee yet and I can't say I'm a happy camper right now. >:-/

I think I'm gonna sing on the potty like my 4 year old does--with the door open!! HAHAHA jk I won't be doing that.

I know, instead of calling all the bad drivers on my way home horrible profanities, today I'll just call them poo-poo heads!! And maybe I'll watch a cartoon too.

I'm gonna stay up 'til after midnight posting on some guys blog that I haven't talked to in years! Oh wait, they didn't have blogs when I was a kid...OK, I'm gonna make some nachos...mmmmm, nachos....


Did you go to MuteMath?