Get the money. Get the girl. Get it all for free.

The mail came yesterday, and with it came a copy of my friend's new novel.

Adam Palmer just recently had his novel "Mooch" published and released. Back when I lived in Tulsa, we had many musical adventures together; many live ones, and some when I recorded his band's demos in my recording studio.

He's one of those guys that is funny, who is just naturally cool, and has potential running out of his ears. Refreshing thing is; he's one of the few guys like that who's actually doing something with those gifts. 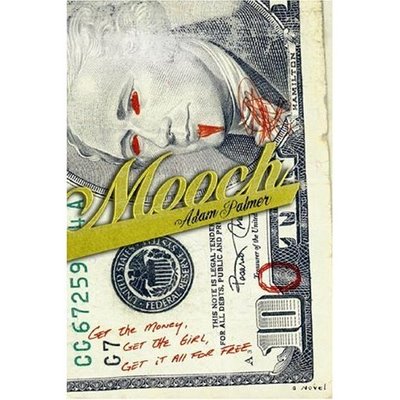 I was allowed to read the book before it was printed, as I was asked to give an endorsement. Why me? Because I'm known the world over as an authority on good writing. No, that's not it. Actually, I have no idea why I was asked, but I'm glad that I was.

At first, as you can probably imagine, I was nervous to read it. I have become accustomed to Adam's writing talent and know what he is capable of, but what if my friend's book stunk? Not surprisingly however, my worry was short-lived, because the sideways humor paired with the inspiring story grabbed me from start to finish.

I became happier for Adam the further I read, knowing that his great talent was about to be released to the masses. Good for the masses.

Get a copy of "Mooch"for yourself HERE.

Mark, just wanted to say that I am glad I tripped over your blog. Just couldn't pass on checking out something called miscellaneous creativity. Good stuff throughout and I plan to recommend the blog. Since you are a fellow lover of music and you have kids, I thought I'd invite you to check out my blog at www.thewudds.blogspot.com and feel free to visit www.wudds.net. Just released a music cd for kids. See what you think. It's family friendly and wuddtastic (new word)!

Thanks for stopping by David. How wudderful of you. :) I look forward to checking out your blog as well. Have a good one.

Mark! How very exciting to be asked for your endorsement. Can you autograph my copy when I get it?? ;-D I did actually order a copy. It just sounded like an interesting and fun read. I LOVE sideways humor with a gripping story. And if Adam Palmer authored a book entitled Taming a Liger, I'm bound to like his writing style. It's my favorite animal.

Glad you ordered one Karen. Lemme know what you think.