Drumming For A Lifetime, pt. 1 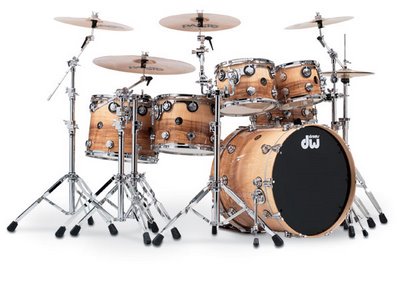 I thought I'd start a series about drumming and it's many built-in therapies. Whether you're playing in a band that tours the world, tours the town, or you never get out of the garage, you can enjoy the benefits of playing drums for a lifetime.

I'm currently teaching my 13 year-old son some grooves, and he's catching on really fast. He's starting to learn about the same time as I started, so it kinda takes me back. Of course, I didn't get to learn on a DW kit! (my DW's have the same finish as the ones in the above stock image)

My first kit was a $20 flea-market three-piece Ludwig. It had a cool 20" kick. A year later, I traded up to a vintage four-piece WFL kit I still own. It was made by Ludwig in the 1950's during the time they had sold the company name. They started making the WFL line of drums (WFL=Ludwig's initials), and they were great. I have recorded many a session on those babies, and they've never let me down.

When I was a kid, my Dad was always supportive of my playing (though not always happy about my practice volume). Nowadays, there are those cool practice pad sets. Maybe I should get one for my son?? Naa, where's the fun in that!

My wife is so cool 'cause she'll often ask me to stop what I'm doing and go play. I can't believe it doesn't drive her crazy when I do, but she seems to like it. We should really video tape the kids during those times, because they are inventing new impossible dance moves every time. (Why is it that when you're between 3-8 years old, you can bend in ways God really hadn't intended?)

My intention is to play drums (and other instruments) until I leave this world and trade them in for a harp. I must confess though, that I'm hoping the harp will also serve as a MIDI controller and be able to playback samples from God's drum-sample library.

More on drumming to come. For now, check out this site: DW Drums
There's a lot of useful information there; I've always enjoyed the "Kitbuilder" feature.
Posted by Mark Keefer on Monday, May 08, 2006

So what happened to the blue DWs?

Glad to hear you still play often. I know too many great drummers who turned into audio guys and hardly ever pick up the sticks...

I agree completely. I started playing on a kit about 2 years ago, and it's saved my sanity more than once. It's an old, banged-up Ludwig Vistalite, but I love it.

Vistalite... sweet. Rock on Greg. I can't imagine laying down the sticks for long. Drumming (somewhat indirectly) got me into what I'm doing today, so why would I ever quit?

{BTW - Listened to "Crush" as it shuffled up on my iPod on the way to work this morning. Again, great job.}

The blue DWs were sold to a good friend before I moved to CA to raise more $$. That was a great set, but I'm equally happy with the new ones.

Yes, sanity is usually a good thing, and if we can perpetuate it with drumming, then God bless drumming!

I was unemployed for a month a couple years ago and drumming was a great diversion from resume writing… I’ve got a wonderful 1959 Slingerland Radio King (pearl!) set that I picked up when I lived in Iowa about 10 year ago as a trade for a 386 computer… *big smiles*. We’re in an apartment in CA now and I’d love to be able to move them out here when we move to a house in June…

In the immortal words of John Dunbar (Costner's character in "Dances With Wolves")...

Maybe I can find someone who'll trade me a Ludwig Black Beauty snare for my old G4 500?