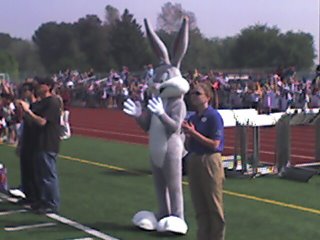 The Special Olympics is definitely a special event. Even Bugs comes to volunteer. (Not sure if he's just looking for easy photo ops, but he played with everyone nicely - no sticks of dynamite or anything.) 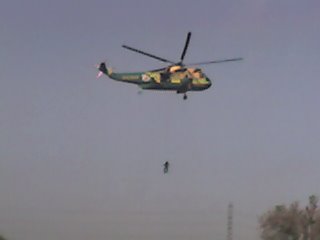 The torch arrived via this gigantic helicopter. Some rescue guy was lowered to the ground to pass it off. Very cool touch. The crowd went ballistic. It's cool that they do these extras, 'cause it makes all the athletes know they matter and are being taken seriously. 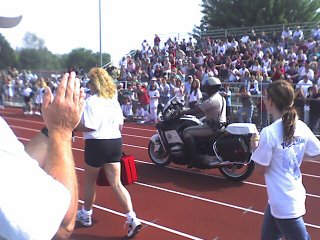 The above photo was taken during the torch's lap around the track before the main torch was lit. Just before this, the motorcycle cop ran over my friend Jeannine's foot. I was on the phone with Chana when this guy was doing a u-turn, took it way fast, and ran up her foot with the front wheel. For some reason,he thought it was funny, and luckily she wasn't hurt, but MAN, next time I get pulled over I might have to give the cop a sobriety test.

For the last two years we've been at the entrance of the field when the teams (teamed up by community, like countries for the other Olympics) come onto the field. They walk in with their heads held high. They are totally pumped up and ready to compete. It's so inspiring, I have always found it hard to keep dry eyes as they walk by me and give me high-fives. The focus on their faces is profound.

Watching some of them compete, you'd think they belong in the other Olympics, because they can run well, or swim fast, or whatever. For some of them, it is a challenge to them to even try to participate in their respective event. For instance, last year I was involved in running the long jump. Some of them had good long jumps that you and I would be proud to have made. A couple of them, it was all they could muster to run the lane and jump over the scratch line. In the standing long jump, a few were afraid to go, so I asked if they wanted me to jump with them. They said yes, so together we would jump "on 3", and they would be so proud of themselves. The surrounding volunteers would go crazy and make noise for them. You could see a pride in their faces that I'm sure is seldom there. Thank God for the Special Olympics and the difference it's making.

Click here to see how you can get involved with the Special Olympics in your area.
Posted by Mark Keefer on Sunday, May 14, 2006

Email ThisBlogThis!Share to TwitterShare to FacebookShare to Pinterest
Labels: Inspiration