Hoodwinked DVD Comes Out May 2nd 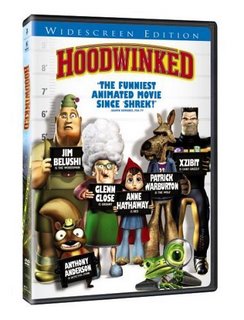 On Tuesday, May 2nd, one of the most clever animated films ever made will come out in the stores.

I might be a bit biased, because this is a movie I'm so proud to say I worked on from the beginning to the end of the process, and it was a GREAT journey. It's also the largest production I've been a part of, and my first feature. There will be a commentary by the directors: Cory Edwards, Todd Edwards, and Tony Leech, plus outtakes, and many extras. (please get the widescreen version so you can see the whole thing!)

I started out editing the whole soundtrack in the beginning, but when the production of Hoodwinked grew (as did the budget), Blue Yonder Films decided to take the movie to Skywalker Sound in Marin County for the complete sound package.

I was fortunate enough to be asked to stay with the picture, so I moved up north for about four months to continue as one of the sound designers as well as to wear a few other hats. I also cut the dialogue (twice, but that's a long story of many new voices joining the picture last minute), and I cut the Foley (you can learn about what 'The Art of Foley' is in another blog entry I made the other day).

One other thing that happened was that I made a great friend in Tom Myers from Skywalker Sound. He is a fantastic sound designer and re-recording mixer with many huge movies under his belt, including Star Wars Ep III, Monsters Inc, Toy Story I & II, and many more. Needless to say, I learned a lot from him as well as from some of the other great guys around the ranch.

I'll not soon forget the experience I had at Skywalker Ranch, and I hope to be back some day soon. My family LOVED visiting when they could. McKenna (our 8 yr old) actually learned to ride a 2-wheeler there a couple of years ago!
Posted by Mark Keefer on Saturday, April 22, 2006