Traveling With The Triibe 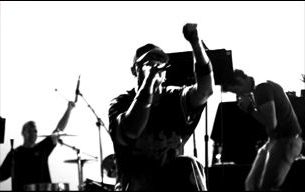 I'm going to Spain on Thursday with a percussion troupe I've played with on-and-off for about 5 years now. It's called The Triibe. It formed in a prayer room at our church in Tulsa just before my family moved to Cali.

It's kind of 'stomp' meets 'blue man' meets God. My chops are feeling rusty, so I've gotten out the pad. I have been playing on a semi-regular basis, but this gig is very intense. I hope I'm ready.

The Triibe usually consists of a guy on a normal drum kit, then 2-3 other guys on percussion set-ups with instrumentation varying from conventional hand percussion to stuff we find in the trash. (usually the trash sounds better, don't ask me why!!) Then there's a guy or two on mics for spoken word (one whom was raised in Spain, so we're good on the language barrier), a guy with a sampler rolling loops (who doubles on perc), and if we're lucky enough to snag one, a DJ.

I don't get to play with them often, 'cause my schedule is crazy, and they don't usually have the budget to fly me in anyway. But the bigger gigs usually pay them enough to fly me in.

About a year and a half ago, I produced their "Raw" CD from recordings they made at local gigs without me. It IS raw sounding, but it's cool. They've talked to me about producing a studio album in the future. We'll see. The thing is, it's usually such a spontaneous vibe with this group, it would probably be hard to pull it off in the studio. Maybe we'll just make some concerted effort to record a few upcoming gigs REALLY well. That might capture the spirit better I think.

In Spain we're playing at the Contra Corriente conference. It's the largest youth conference in Spain and is celebrating it's 10th anniversary. They deal with the same teen issues our American teens deal with. The point of the conference is to empower them to overcome today's obstacles by relying on the help and power of Jesus to make better choices.

I'll be back in a week to report details and stuff. If I get a chance to step into an internet cafe, maybe then. Adios!
Posted by Mark Keefer on Wednesday, April 26, 2006

Very cool!!! Have an awesome time.

is there are way i can purshase that Triibe "raw" cd you were talking about?

hey i saw TRIIBE on a 24-7 podcast, and was wondering whether you guys have a CD too. so my question is the same as "anonymous" i guess!